Anyone who is even remotely associated with app development must know that building a complex application is a very difficult task. It is even more challenging when it involves usage of IoT software and hardware. Thankfully, the latest development kits and tools make it a lot easier to successfully build IoT solutions. In the age of the internet, IoT has become a very commonly used word. However, for it to reach its full potential, there is a need for a well-connected and vast infrastructure which may take many years to be operational. This is the reason why several companies who are responsible for providing IoT solutions are now creating hardware and software designs that help different developers with novel and innovative IoT devices and applications.

There are tools such as Tessel 2, with the help of which you can create basic IoT prototypes and solutions. It can be a massive help in handling numerous modules and sensors. It is a board which can have the capacity to hold a maximum of twelve modules which includes RFID, GPS, accelerometer, and camera. It is particularly useful for Java developers who work with Node. JS as it can be easily programmed by using Node.JS to unveil a wide range of devices within minutes. The Tessel 2 has two processors and uses a 580 MHz MediaTek MT760n and 48 MHz Atmel SAMD21 coprocessor. One of the processors help you run the firmware applications run smoothly and quickly, the other processor helps in improved input/output control and efficient power management.

One development kit that can help you gain a lot of technical expertise is Eclipse IoT. It has a massive assembly of services and projects which covers a lot in the field. It comes in handy for IoT developers when building cloud platforms, IoT devices, and Gateways. It is widely recognized as an excellent collaboration of several companies and individuals who are continually striving development and are looking to establish IoT open technologies. It can help you promote, develop and also adopt different open source technologies. In the process, you get a lot of technical expertise.

is a premium IoT development which is a known cross-platform IoT development environment. The main feature why it is being used extensively is its high compatibility.  It is compatible with about 200 boards. Moreover, it has a build system that is supported by IDE and a library manager. It gives you the option to either port the IDE at the top of the Atom editor or to use it as a plug-in. Additionally, it has an excellent debugging integration. All these features mean that can help you develop IoT applications much quicker than ever before.

Arduino is an ideal choice for anyone who is looking to build a computer system which is capable of sensing and controlling the physical world better than the regular standalone computers. It offers a perfect mixture of IoT software and hardware. It is an easy-to-use platform which is also be used for open source prototyping. It works by operating through some hardware specifications which can easily be applied to different types of interactive electronics. When choosing the software you have the option to either pick Arduino Programming Language (APL) or the Integrated Development Environment (IDE). You can opt for several Arduino tutorials online to get more insights and make your learning curve steeper.

Get Support for Many IoT Products with IFTTT

If This Then That, better known as IFTTT, started out primarily for home automation. However, with time it has also made a significant mark in the support services offered by some of the best technology firms in the world like Wemo, Philips Hue and Nest. With the help of IFTTT, you can easily connect and control a wide range of IoT automation devices. The webhook feature is a critical element of this tool as it can help establish a secure connection with several other IoT applications. It is a unique feature that has impressed many expert developers all over the world.

The process of building IoT solution is a long and a tedious one. The best way to reduce the time and the challenges of building IoT solution is to utilize a top class platform. If you are looking for a platform like this, then there is no better choice than . It has the potential to not only simplify the IoT development routine but it can also secure the entire platform. You can easily connect to a massive range of hardware components with . It is a massive help to the developers as far as the management of IoT devices concerned. Additionally, it can also aid in real-time visualization and data collections. Due to these reasons, has been a massive hit among the developers. 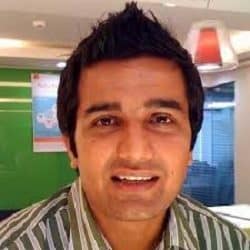 Saurabh has worked globally for telecom and finance giants in various capacities. After working for a decade in Infosys and Sapient, he started his first startup, Lenro, to solve a hyperlocal book-sharing problem. He is interested in product marketing, and analytics. His latest venture Hackr.io recommends the best React tutorial and online programming courses for every programming language. All the tutorials are submitted and voted on by the programming community.

Disclosure: AboutSSL appreciates your continuous support. It helps us tremendously to keep moving in the competitive SSL industry. Here most of the links which direct you to buy any SSL/TLS related service or products earns us a certain percentage of referral commission. Learn More